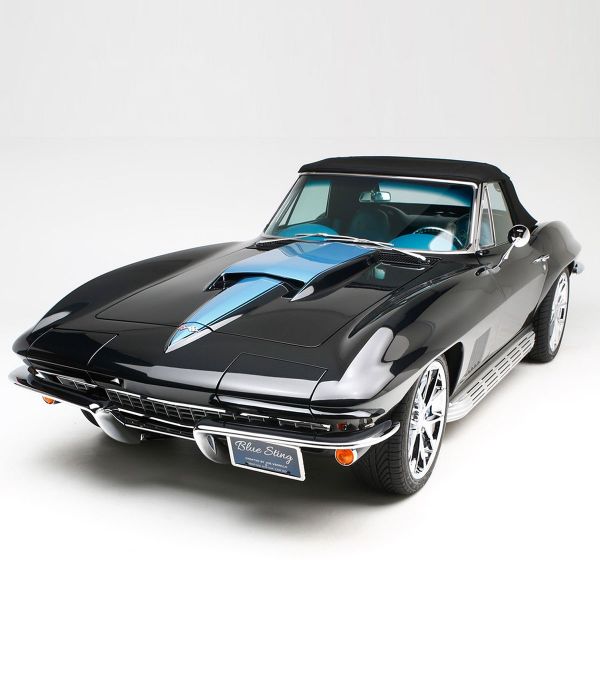 An original 427/435 roadster is reborn as a contemporized classic

No question about it. When it comes to mid-year collectability, an original 1967 427ci/435hp car is at the top of the pyramid.

So here’s the thing; the 427/435 cars weren’t all that rare. Sure, after nearly 50 years, however, attrition has taken its toll and there are far fewer examples left than rolled off the St. Louis production line, but 3,754 were originally built. That’s not much by, say, Mustang standards, but in the realm of Corvettes, that hardly puts them in the same rarified air as an L88.

The Evolution of a

The horror, you say? Not when you understand that while the car was indeed born with the L71 engine, its originality was destroyed years ago when it was taken on a joy ride by an unauthorized driver. It had been owned by a prominent professional athlete and the incident occurred during his tenure with it. When the car was returned, the original engine and other important components were long gone. It changed hands a couple of times after that before Verrillo obtained it.

“The car definitely had a story to go with it,” says Verrillo, the owner of Prestige Motor Car Co. – an Albany, New York-area dealership specializing in Corvette sales, service and restoration. “I was intrigued by the history and the fact it was an original 427/435 car, but beyond that, I wasn’t sure what I was going to do with it at first. With its shaded history and original drivetrain long gone, a concours-type restoration didn’t seem appropriate, so the idea of taking the restomod route made more and more sense.” 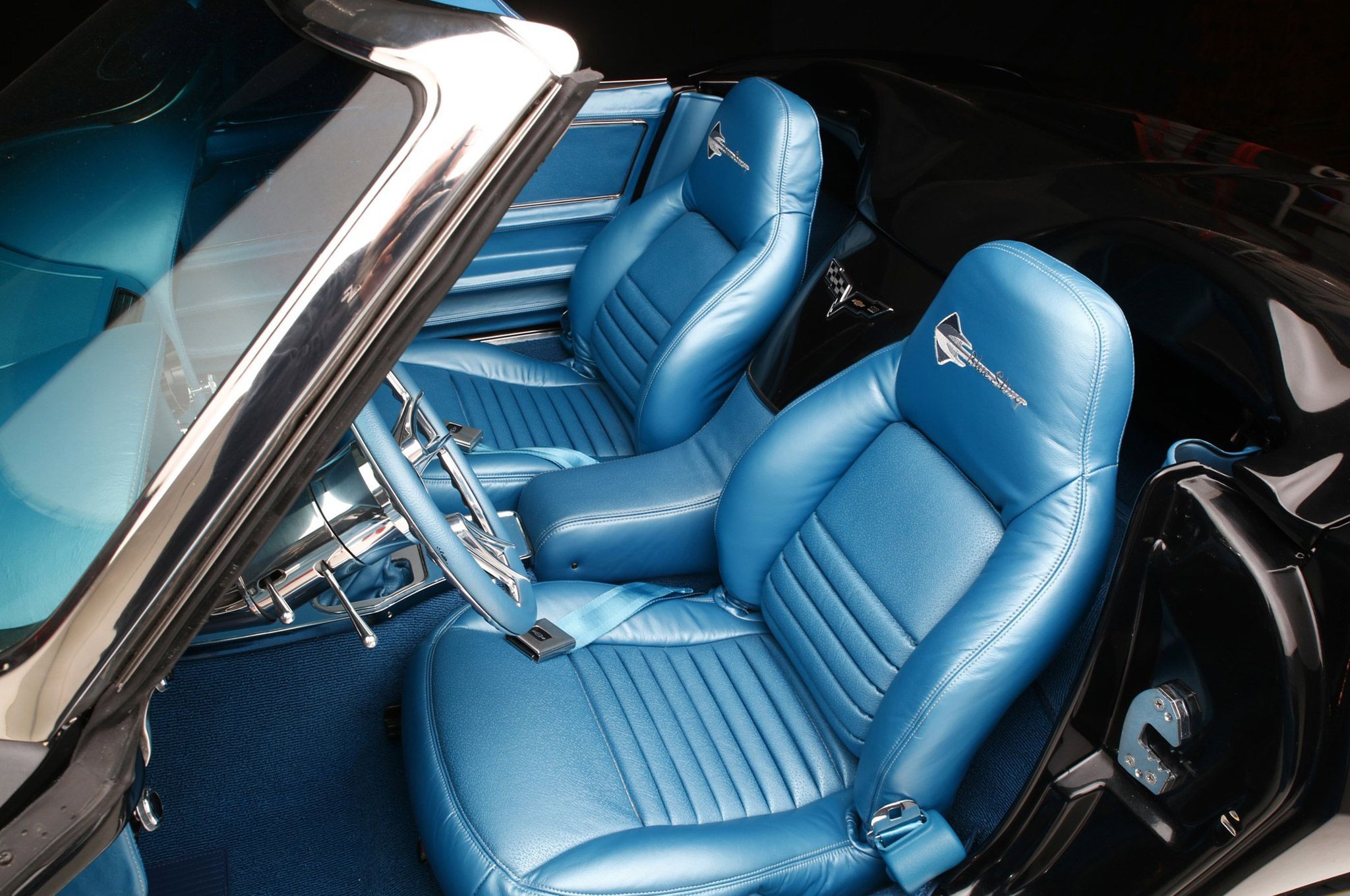 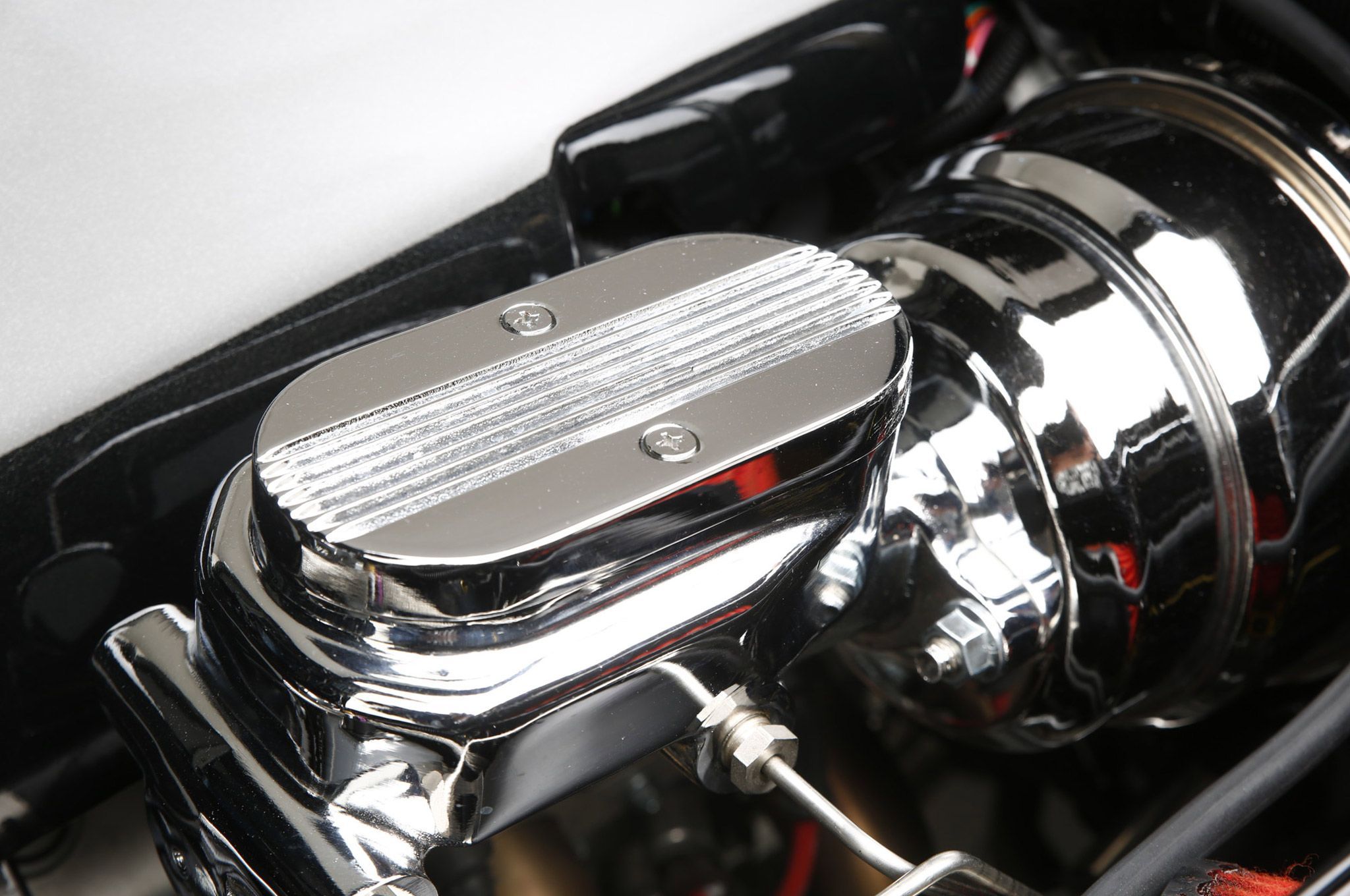 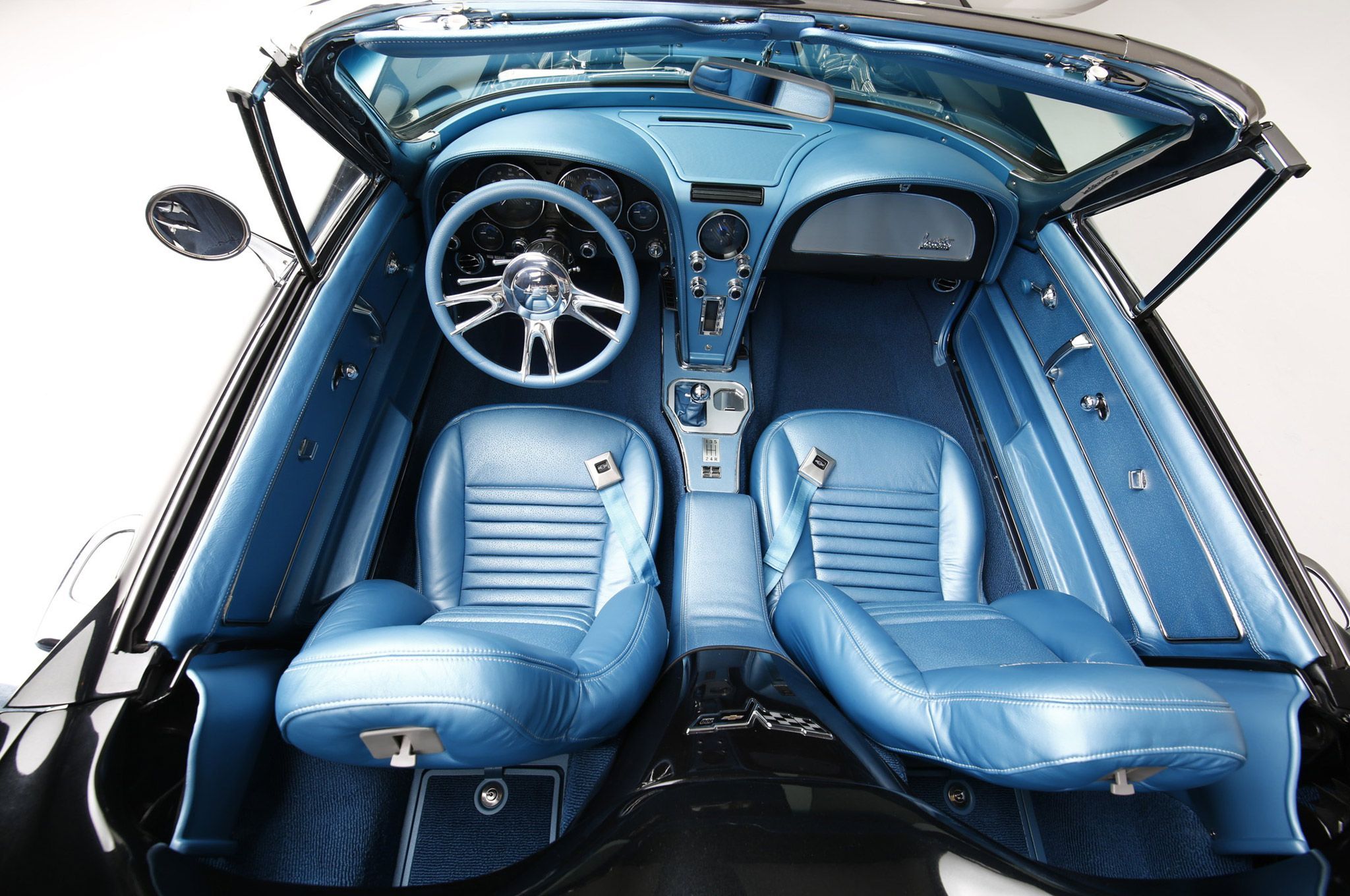 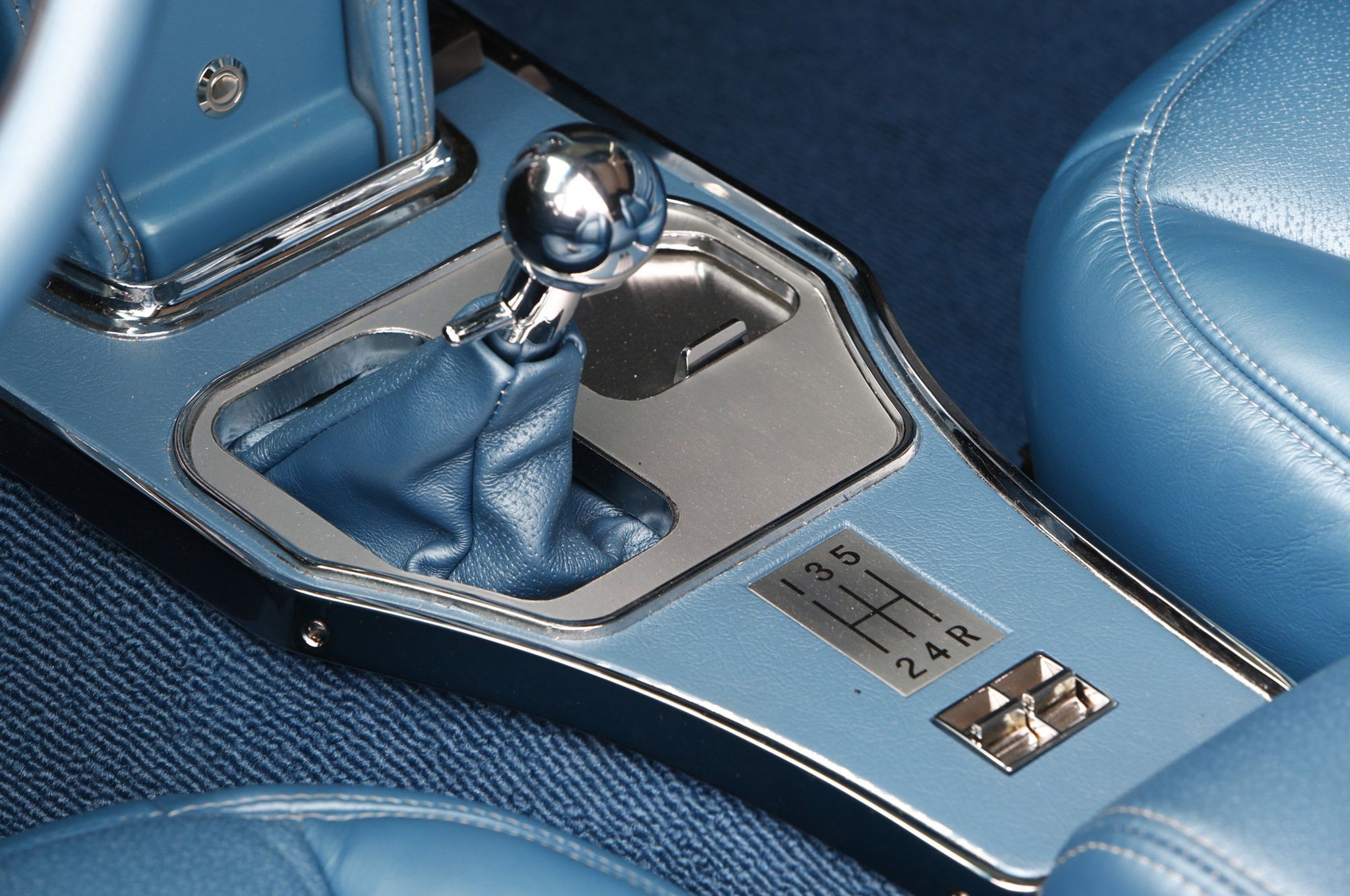 A number of Verrillo’s personal cars have earned Bloomington Gold certificates and NCRS Top Flight awards, so he knows what he’s talking about regarding the feasibility and, frankly, the fiscal viability of a 100-point-type restoration.

“There are a lot of great 427/435 cars out there with their original drivetrains, so there was no reason in trying to compete with them,” he says. “The numbers just wouldn’t add up. On top of that, I was itching to do something more creative through our shop – not the typical authentic restorations my team is used to doing.”

Like many enthusiasts today, Verrillo’s plan involved building a car that maintained the classic visual identity of the 1967 Corvette and complementing it with contemporary powertrain and chassis systems – an LS-based engine, overdrive transmission and late-model suspension elements.

Fortunately, the trend in restomod Corvettes is cruising right along, with the support network of aftermarket components growing daily to help make such projects almost bolt-on affairs. Take the chassis, for example. Rather than adapt late-model suspension components to the original frame, Verrillo and his builders turned to Street Shop for one of its custom chassis. The Athens, Alabama-based company’s frame is a direct replacement for the ’67’s C2 frame, incorporating current technology and all-aluminum suspension components – although coilover springs replace the original-type transverse leaf springs.

The Street Shop chassis also incorporates modern rack-and-pinion steering and the engine mounting location is lower than stock, which enhances the car’s handling by lowering the center of gravity. Better still, the frame features the same body mount locations as the C2 frame and also accepts the original fuel tank.

When it came to filling out the frame, Verrillo used chrome coilovers and a polished rack-and-pinion steering rack while adding a custom stainless steel fuel tank. The rear axle is a Viper-spec Dana 44 with a 3.55-geared limited-slip differential. It’s a one-off assembly designed and built by Street Shop exclusively for this car.

The stout axle is necessary to absorb the torque from a Chevrolet Performance LSA crate engine. That would be the same supercharged 6.2L engine used in the Cadillac CTS-V and Camaro ZL1, rated at 556 horsepower and 551 lb-ft of torque. A set of scratch-built stainless steel headers channel the exhaust to factory-style side exhausts, for a dramatic effect.

Supporting elements for the LSA include a polished-aluminum, four-core radiator blown on by a pair of chromed electric fans. There’s also a custom engine cover that mimics the exterior paint scheme, including the blue-painted stinger and a custom emblem.

Backing the force-inducted LSA is a Tremec TKO five-speed manual transmission, which provides the sort of modern-day, freeway-driving capability that, with all honesty, is lacking in early cars with non-overdrive transmissions and steep gear ratios. A Hurst Sidewinder shifter is bolted to the manual gearbox and is used with a factory-style chrome shift knob and shaft to maintain the factory appearance.

“Again, the goal was to retain as much of the personality of the 1967 Corvette as possible, so we didn’t want to use a shifter on the inside of the car that looked clearly aftermarket,” says Verrillo.

Because putting more than 550 horses worth of supercharged LS engine to the ground and bringing them to a halt again would have been ludicrous with original-type wheels, tires and brakes, the car’s most obvious departure from the assembly line is the set of chrome Z06 wheels wrapped with Goodyear Eagle F1 run-flat tires. The rims measure 18x8.5 in the front and roll on 245/40ZR18 tires, while the rears measure 19x10 and roll on 285/35-series rubber. 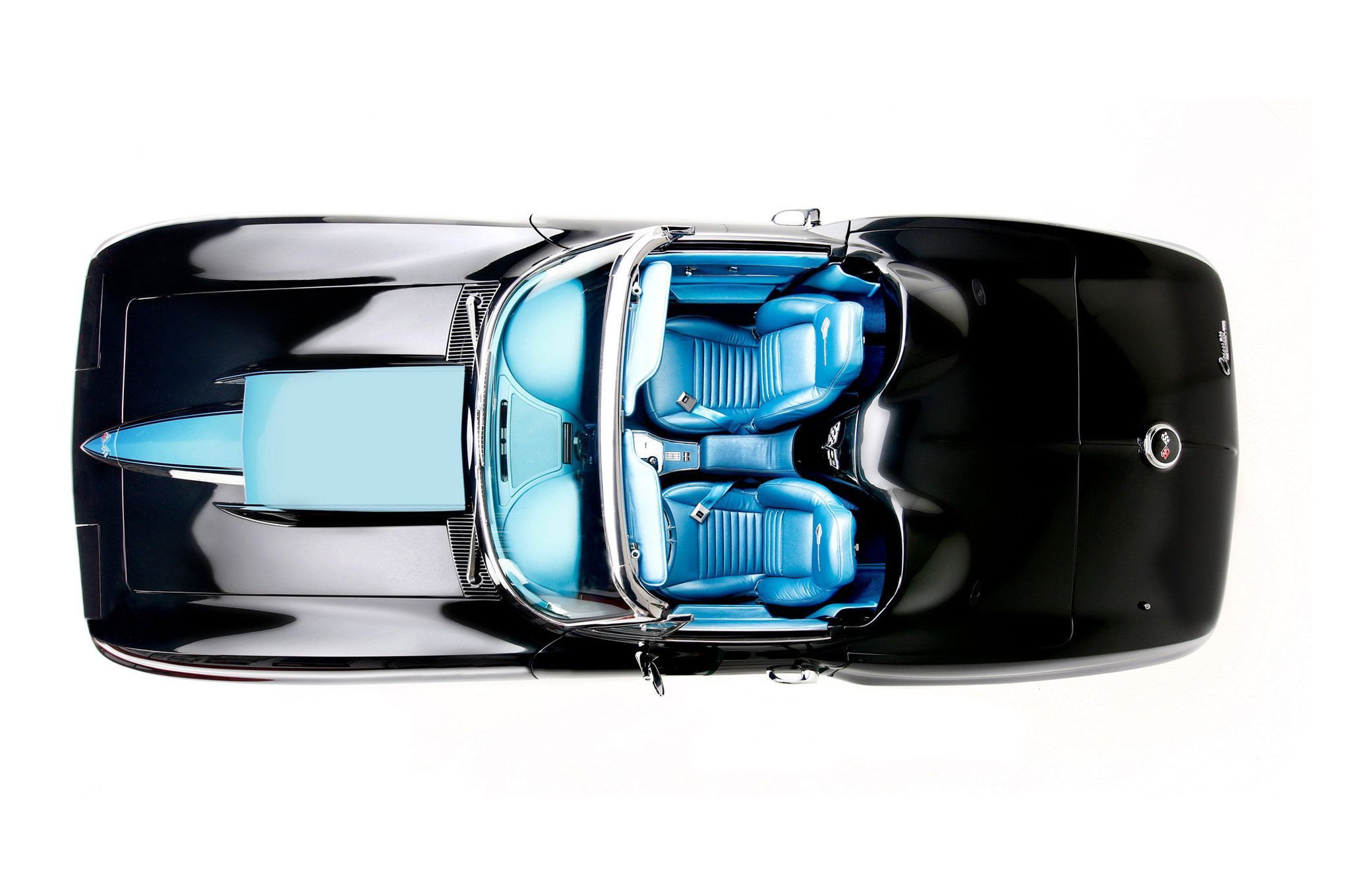 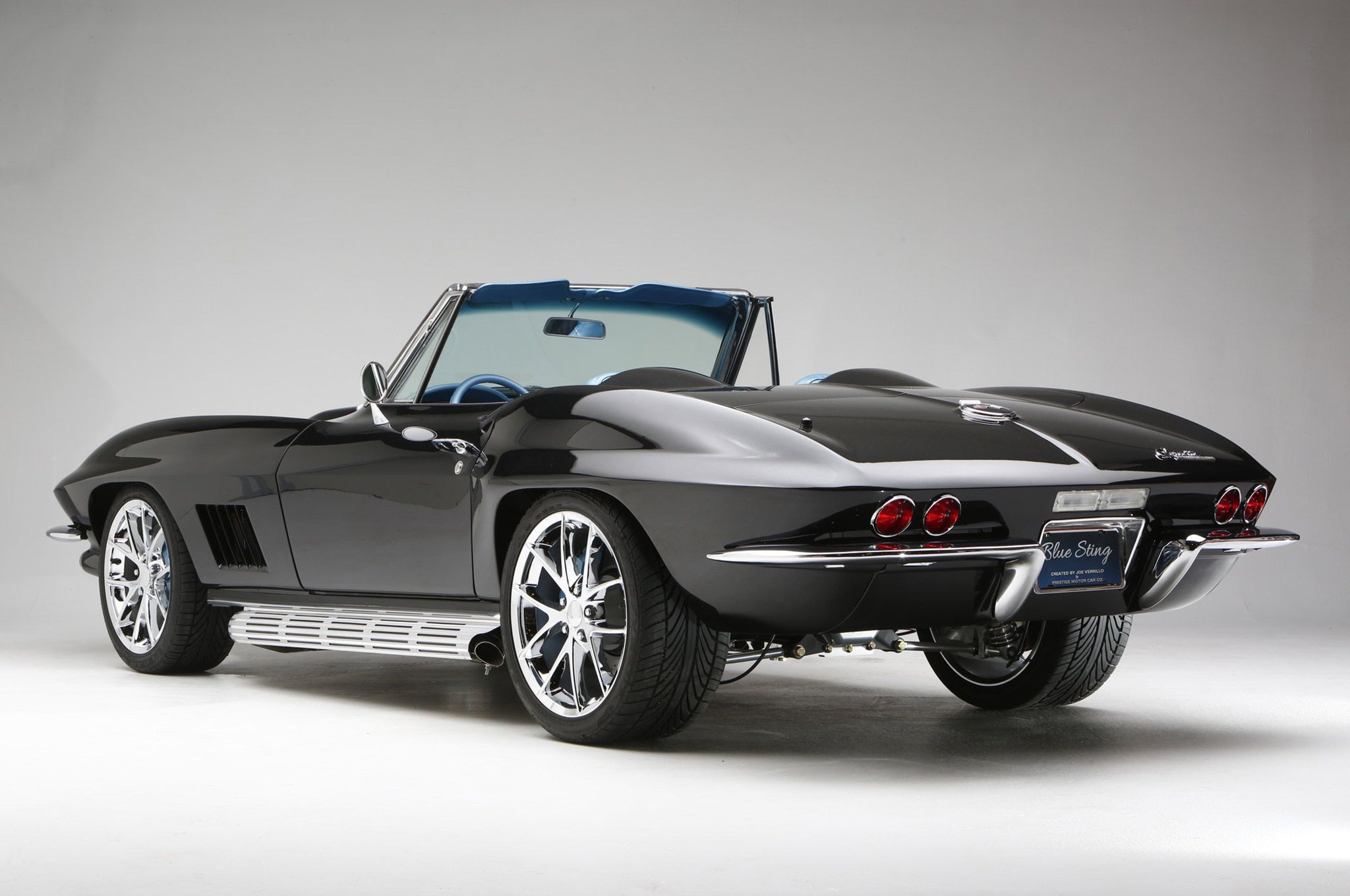 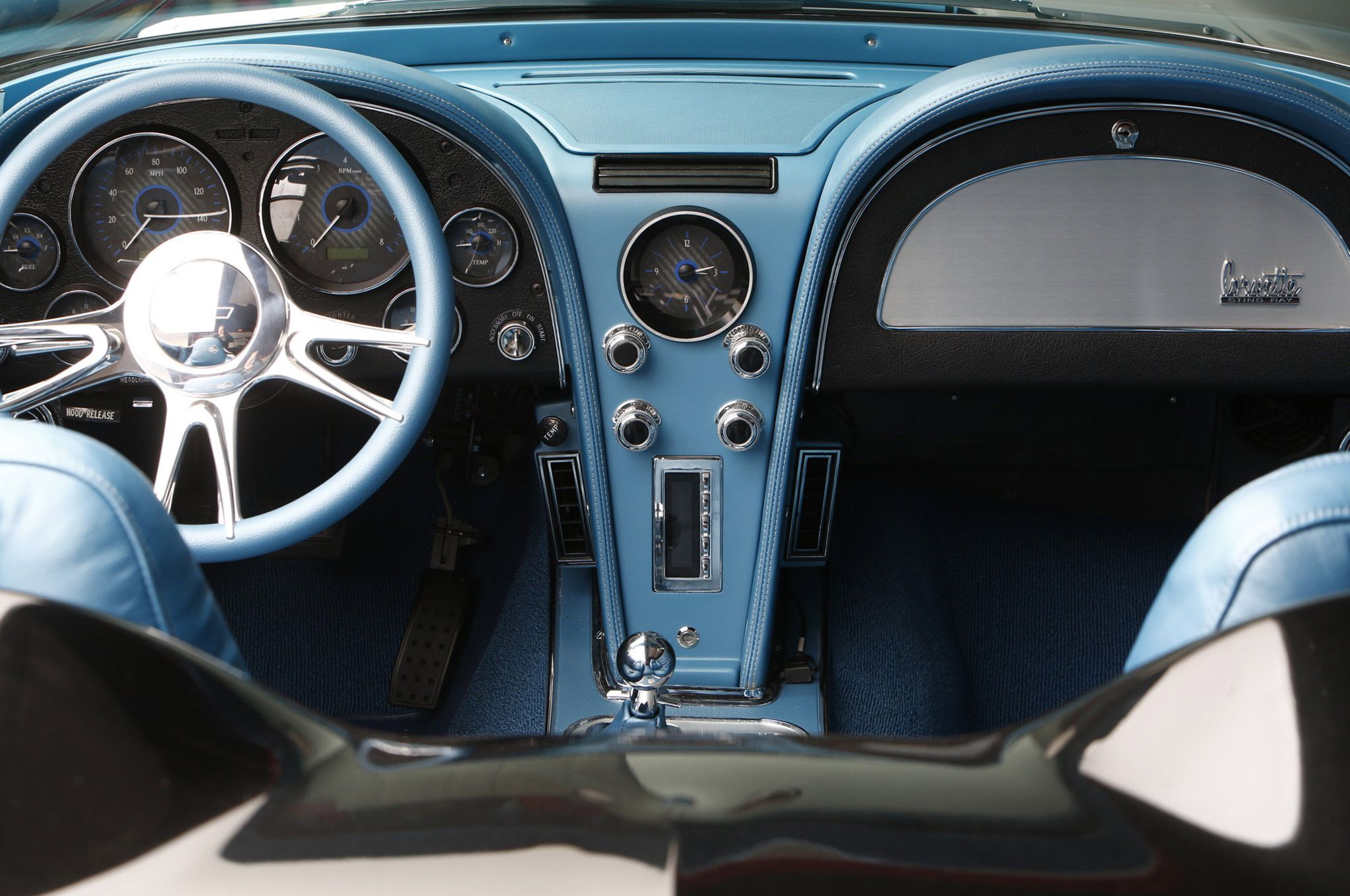 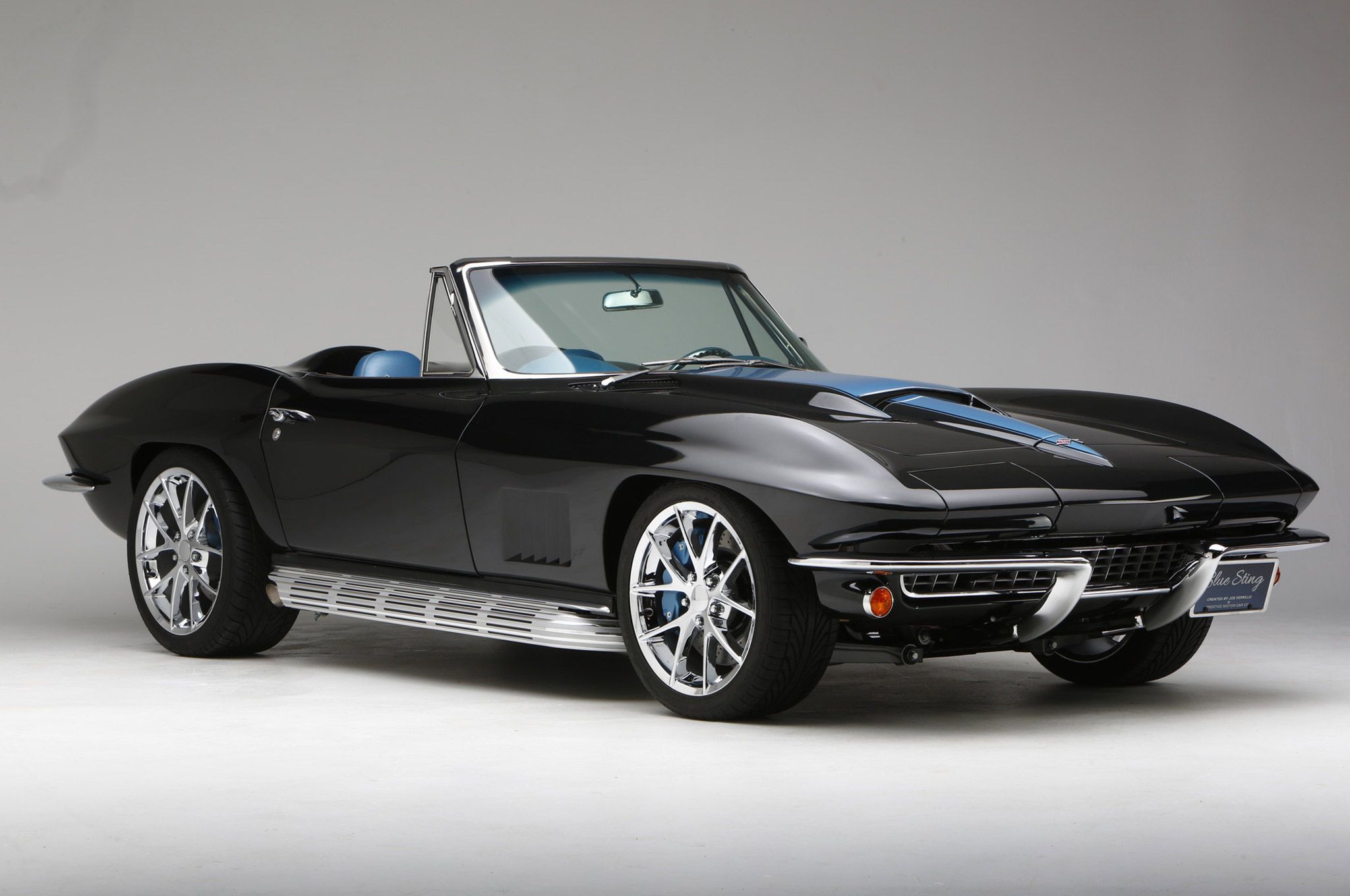 The color-coordinated calipers represent only the tip of this car’s attention-to-detail iceberg. The decklid, for example, is crafted from the “waterfall” of a C6 convertible and cinched with a C4 latch mechanism. It’s so beautifully integrated that those who aren’t mid-year aficionados may not realize it isn’t the car’s original styling. The exterior color also blends old and new, with a Marina Blue stinger accenting Chevrolet’s Centennial Edition Carbon Flash Metallic paint.

“There are elements from nearly every Corvette generation in this car and we applied them carefully to accent the design or complement the performance without distracting from the overall presence of the mid-year design,” says Verrillo. “We took the same approach with the interior, where just about every enhancement or incorporation of modern technology is cloaked in the original design.”

The seats are a perfect example. They’re C6 buckets that have been shortened and trimmed in bright blue leather with period-perfect pleats and piping, while retaining the factory eight-way power adjustability. Nice!

Likewise, the Dakota Digital instrument cluster features vintage-looking analog gauges with modernized guts that accommodate the electronic messages from the LSA crate engine’s controller. An LCD message center is the tip-off to the 21st century gauge panel and it offers the necessary readouts for the electronically controlled powertrain, including a check engine display. Dakota Digital seems to have a hit on their hands with these drop-in gauge panels because we’ve been running into them on just about every restomod car we encounter these days.

The rest of the interior is trimmed in bright blue leather, including the instrument panel, center console and the custom center armrest. Even the billet aluminum steering wheel is trimmed in blue hide. It’s attached to a polished stainless, tilting steering column. There’s also a modern sound system baked into the Corvette’s interior featuring Bluetooth connectivity and USB ports, and it’s controlled by a factory-looking head unit mounted vertically, like an original radio.

Additional yields to modern comfort and convenience in the cabin include air conditioning, power windows, power steering and power brakes – features that round out the yesterday-meets-today driving experience of this sacrilegiously delectable roadster. “It’s everything you want in a Corvette – the classic, unbeatable styling and sound of a big-block mid-year car with the uncompromising performance that comes with 50 years of technological advances,” says Verrillo. “The power is unbelievable and with the all-aluminum engine and lighter-weight front suspension and steering components, the balance of the car is tremendous. If you’ve ever driven a big-block mid-year car, you’ll feel the difference within the first 20 feet of driving it – and particularly when you hit the brakes. It’s simply thrilling.”

Sure, there’s one less restored 427/435 car in the world today, but there will be no hand-wringing from us. Verrillo’s masterfully executed Corvette represents the very best of the restomod trend and shows what’s possible when building a car isn’t driven by date-coded hose clamps or paint daubs on the chassis. It’s creative, it’s fun and we love it.

All right now, who wants to cut up a ZL1?

Other Features and Magazines

Verrillo Cars have been featured and recognized in dozens of Magazines and Online Publications over the years. Below are just a sampling of those.